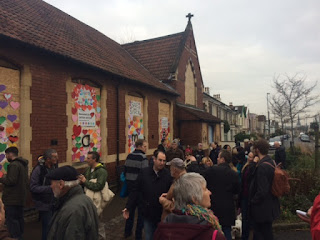 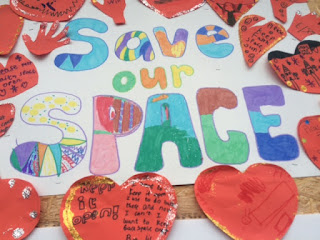 Southville’s two Green councillors will today call on the mayor and the council to pledge support for a well-loved community venue in Southville.


Faithspace is a former Methodist church on Stackpool Road in Southville, which has been used for community activities for many years. The venue was closed down a year ago and is now boarded up and starting to deteriorate. The Methodists intend to sell the building while the local community are campaigning for it to be retained for local community use, rather than just sold to the highest bidder.

Southville’s Green councillor Stephen Clarke has submitted a question to the Full Council meeting on 15th December to ask the mayor for support in the campaign to keep Faithspace as a community venue. He said:

“We are really short of community venues in Southville. We already have a high density of housing, and more houses are planned as the population in the ward continues to increase. That’s why we need to keep what community venues we have to ensure that Southville remains the vibrant and attractive community it currently is.”

Southville’s other Green councillor, Charlie Bolton has also submitted a statement to the council meeting, stressing the importance of Faithspace for the local community.
The meeting follows a ‘love-bombing’ event of Faithspace at the weekend – where nearly 100 local people came to express their support for the former church by attaching hearts to it, explaining why they think it is important.

Greens have been lobbying for the building to be retained for community use for many months. Councillor Bolton submitted statements of support last winter, and he and Councillor Clarke have lobbied the mayor, assistant mayor and officers to take all possible steps to support the community in their campaign to save this community space.

Faithspace is a much loved part of the Southville community scene.

As local councillors for the ward of Southville, we would like to congratulate the significant numbers of people who turned up on a December Sunday afternoon to express their support for Faithspace. Local people of all ages expressed their support for the venue by leaving messages of support in the shape of hearts on the building. They have made it very apparent how important the building is to the local community.

It has been a struggle to get the Methodist church to engage with the local community locally, and it seems clear that they intend to sell the building to the highest bidder. This is a real pity.

We therefore ask the mayor to take what steps he can to support the community of Southville, including talking to the recently formed campaign – and help us save Faithspace for community use.

As Labour and Green Party councillors for Southville, we jointly submit the following statement.

Faithspace is the former Methodist Church on Stackpool Road. It lies between the Southville Centre and Southville Primary School.
It has been a community venue for as long as people can remember. Users, however, have recently been stopped from using it, and the venue has recently been boarded up.

There has been a significant increase in the population of the Southville ward over recent years. This has resulted in an increase in the pressure on local resources and infrastructure. For example, there is a serious shortage in nursery provision in the area.

There is significant local concern over the closure of Faithspace. It has been registered as a 'Asset of Community Value'. There is a local petition in support of its retention as a community venue.


We have no knowledge of plans for its future. However, there has to be a possibility that it will lost as a community venue.  We believe we simply cannot afford to lose community venues in our local area. We urge the council and the mayor to take whatever actions it can to help ensure it remains as a venue for the benefit of the community of Southville as a whole. In particular, we ask that the council do all it can to protect its current planning use