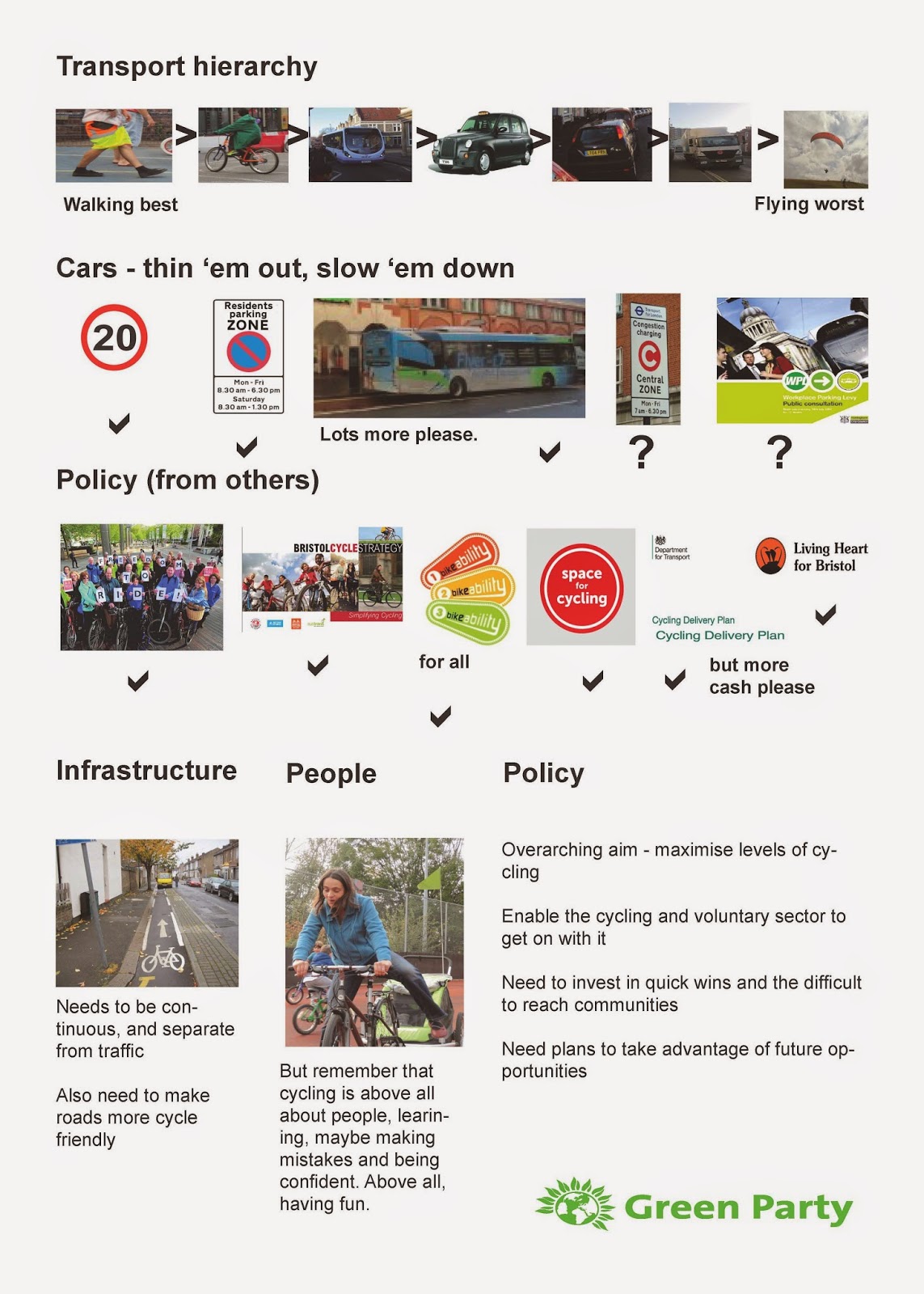 I'd just like to register my consternation at the way in which the Bristol Labour Party, in cahoots with the local Tories have got together to try and derail 20mph zones at the recent council meeting.

The 20mph debate is riven with misinformation by the car lobby. It ranges from claims (as put by local Tories) that accident levels have gone up in the original 20mph zone in Portsmouth to claims that there has been a national increase. (In Portsmouth, if you speak to their Road Safety Team - you will see that there has been a substantial reduction in accidents. Nationally, figures for accidents in 20mph zones went up, but only because the numbers of zones also increased substantially. Academic research tells us that there is ‘convincing evidence that these (20mph) measures are effective in reducing accidents and injuries, traffic speed and volume’
I have no expectations of the Tories when it comes to having a decent environment for our children, for pedestrians, for cyclists, or for pensioners. They talk the ‘green’ talk from time to time, but you can tell, in their heart of hearts, they simply don’t believe it.
But Labour?
They have called for a stop to the 20mph rollout for an unspecified period of time, and any future measures will be at an unspecified cost. Why couldn’t they have allowed it to go ahead while finding imaginative ways to make sure it really works for everyone. Traffic management may help, but at heart this needs a cultural shift in the way drivers use the city's roads.
20mph is part of package which also involves promoting cycling and walking and public transport.  If we are to develop into a truly green city, we need to make profound changes to our travel patterns, and this is just one part of the solution.

Why the Tories are oh so wrong on 20mph

The Tories have submitted a motion try and stop the roll out of 20mph.

Council notes with concern the growing doubts which have been expressed over the efficacy of the mayor’s controversial 20 mph speed zones.  At the time of writing, the Authority is halfway through this costly roll-out, with a Speed Limit Order pending for the so-called Inner Ring East section of the city.

Evidence from the prototype (Portsmouth) model and anecdotal reports locally suggest that these limits may actually make some of our roads/streets more dangerous or are simply being routinely ignored by motorists.

Accordingly, Council calls on Mayor Ferguson to put an immediate stop to this programme to allow an objective assessment to be made into these schemes.   Their success should be judged in strict scientific safety terms and not rely on some shifting, subjective, criteria such as whether or not speed limits have a ‘civilising effect’ on Bristol communities and neighbourhoods.

They cite Portsmouth as an area where 20mph make our streets more dangerous.

Well, one has to ask where they get their information from.  Because I asked the Road Safety Team at Portsmouth Council and this is what they said (see end of this post for full statement):

The analysis shows that in the three-year period prior to the scheme there were a total of 505 collisions. The corresponding figure for the three-year period following implementation is 410 collisions, which equates to a reduction of 18.8%. Across the rest of Portsmouth’s roads, during the same period the number of collisions fell by 10.3% - from 1,618 to 1,451.

In other words, there has been a 20% reduction if you compare the 3 year period before with the three year period after.

If you compare the three year period before (505 collisions in the time frame ie 168.33 per annum on average) with the last two years (67 and 68), the numbers of accidents have reduced by around 60%.

One assumes that a motion which suggests that 20mph be judged scientifically, would itself should do a basic bit of science (ie check that it has got its facts right).

So the Institute of Advanced Motorists have claimed a 26% increase in accident levels in 20mph zones.


They link to a BBC radio programme which precisely backs up what they say. Frankly, I find it utterly shocking that a serious organisation such as the IAM would produce such sloppy statistics.

I don't know if the Tories mean't this IAM report when putting in their motion (because they don't source their evidence, despite expecting others to take a scientific approach), but if they do, they should be ashamed of themselves.

It did occur to me that the Tories might be saying you can only use local information on the impact of 20mph, because there are local factors which effect the outcome. This might be right.

But you'd then be in the scenario where

I do hope the Tories apply the same logic to all their policies.

Peer reviewed science is something a little more substantial than stuff you find with 'Mr Google'.

A report 'Go slow: an umbrella review of the effects of 20 mph zones and limits on health and health inequalities' Cairns/Warren/Garthwaite/Greig/Bambra University of Durham tell us

Five systematic reviews were included. Overall, they provide convincing evidence that these measures are effective in reducing accidents and injuries, traffic speed and volume, as well as improving perceptions of safety in two of the studies. There was also evidence that such interventions are potentially cost-effective.

Twenty mile per hour zones and limits are effective means of improving public health via reduced accidents and injuries. Whilst there was no direct evidence on the effects of interventions on health inequalities, targeting such interventions in deprived areas may be beneficial.

All methods used in this study confirmed previous findings that London’s 20 mph zones have had an effect on reducing casualties.

The time series regression analysis estimated a 42% reduction (95% CI 36%, 48%) in all casualties within 20 mph zones compared with outside areas, adjusting for an annual background decline in casualties of 1.7% on all roads in London. The largest effects of 20 mph zones were found for all casualties aged 0 -15 killed or seriously injured (KSI) and for car occupants. A reduction was evident for all 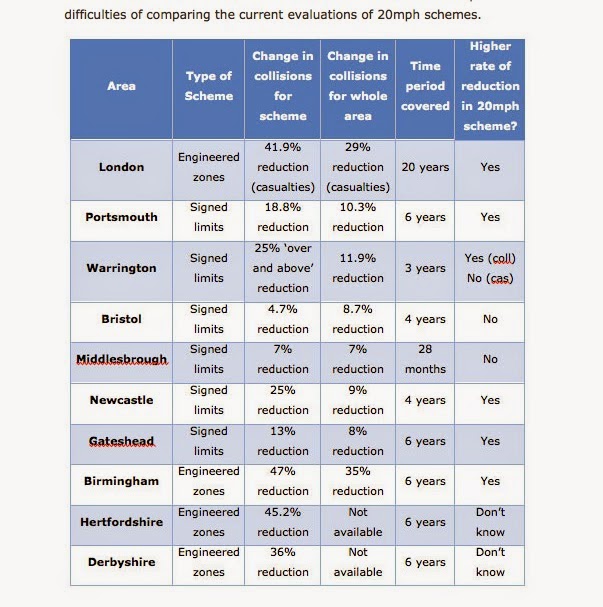 In fact, they probably won't accept any evidence at all

If you go to Place scrutiny commission meetings, you will see opponents of RPS disagreeing with any statistic or piece of information that doesn't fit in with their case. (They'd probably argue the same about its supporters). But their is no level of evidence which they will believe.

....and if the motion passed

well, what would happen? The Tories ask for an objective assessment to be made into these schemes

One can only assume that the Road Safety team at Bristol City Council would perform such an analysis. Actually they already have - indeed they specifically agree with what I have said re national figures.

It is part of a package

Every now and again, the Tories talk the talk of sustainability. But they never actually seem to like any of the solutions.

It is obvious to anyone who recognises the vital need to maximise those travelling by walking, or cycling that we need to make it a more attractive option. Too many cyclists are intimidated off the road by cars. Too many potential cyclists do not start in the first place for the same reason. We must reverse this trend.

If we actually want to combat climate change, we have to make these changes, along with many others. 20mph fits with slowing the traffic and in doing so, encouraging cycling. The same rationale exactly applies to motoring.

And the odd other point

There is even some evidence to suggest that driving at 20mph is fuel efficient because you do less braking, gear changing etc. Not conclusive, as far as I am aware, but more than possible.


Bristol City Council tell us 'The most up to date and robust evidence shows 31% of pedestrians are killed if hit by a vehicle travelling at 40mph, 7% are killed at 30mph – a four-fold difference, and at 20mph the rate is lower still. '

There is a substantial amount of evidence that 20mph is working and reducing numbers of accidents. The evidence for the opposite is flawed.

We, as Greens, believe we need to improve the effectiveness of our 20mph zones - make them work better by the appropriate measures, be it enforcement, filtered permability, traffic calming, DIY streets or whatever.

There is no doubt we need to shift the balance on our streets away from being car dominated.


Portsmouth 20mph scheme
Summary: mature, area-wide scheme under which collisions have reduced by 18.8% on the roads where a new 20mph limit has been implemented, compared with 10.3% across the rest of the city’s streets.
Portsmouth City Council was the first local authority in England to implement an extensive area-wide 20 mph speed limit scheme covering most of its residential roads which previously had a 30 mph speed limit. The scheme, which covered 94% of the city’s residential road length, was implemented in 2008.

In terms of the some of the headline figures showing increases as a result of 20mph implementation, this is false. The difficulty here is that we must compare like for like in terms of roads analysed. Some studies have used 20mph casualty data for the years the scheme was being implemented (2007 to 2008).  These studies searched for 20mph casualties rather than studying the roads themselves which means that from 2007 to 2008 the data would show an increase in casualties because there are an increasing number of 20mph roads. It is best to avoid studying this implementation phase altogether and focus on the geographical area before and after.

All injury collisions were included to ensure a large sample size and to avoid any skewing of the data where severity levels might have increased with higher speeds.

The analysis shows that in the three-year period prior to the scheme there were a total of 505 collisions. The corresponding figure for the three-year period following implementation is 410 collisions, which equates to a reduction of 18.8%. Across the rest of Portsmouth’s roads, during the same period the number of collisions fell by 10.3% - from 1,618 to 1,451.

This period compares favourably with the reductions within the rest of Portsmouth's road network during the same period.  There was a 31% reduction of collisions in 20mph roads compared to a 10.5% reduction in 30mph roads and an 11% reduction for all roads.

The Green Party in Bristol would like to welcome  this continued investment in Sustainable transport.

We may have some disagreements about elements of the detail of the project, but are in no doubt that the overall thrust of the project is precisely the sort of thing which Bristol City Council should be pursuing.

We have no doubt that we need to massively increase levels of cycling, walking and the take-up of public transport, and this fund is one of the mechanisms that we should exploit in order to achieve this.

We further believe that we need to maintain investment in cycling in order to justify the title 'Cycling City'. Bristol should also seek to be come a 'Walking City'.

We believe it vital that investment is continued and accelerated in the years post-2016. This could, for example, help to deliver a comprehensive cycle network as outlined in the putative cycling strategy.

We therefore urge the council  and the Mayor to keep LSTF type projects as a priority for the council in the years beyond 2016 and seek opportunities to fund them.
Posted by Unknown at 11:38 No comments: