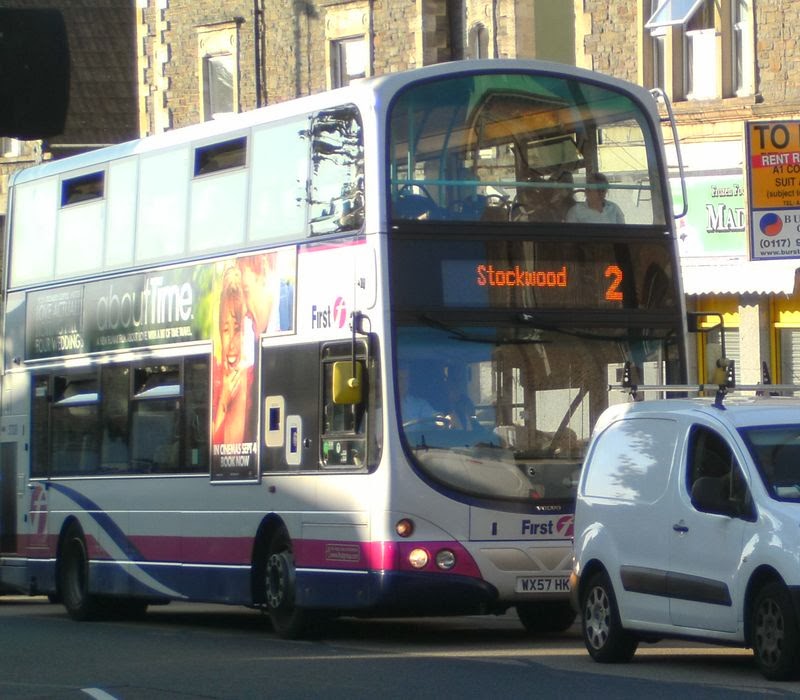 Green Party councillors in Southville have asked  First Bus to meet the local demand for a direct bus link with Temple Meads.

A Green Party survey (Note 1) of over 200 residents has shown that a Temple Meads link is top of the list for improvements to local bus routes.   At present there is no direct link between the city's central rail hub and most homes and businesses in the south west of the city.

The survey was conducted before Christmas by a team led by Cllr Tess Green, and prospective councillor Charlie Bolton (Note 2).

They have since talked with officials at First Bus, who accept there is a demand for bus services from BS3 to Temple Meads. However, they don't want to re-route either the existing 24 or 25, because their new 10 minute daytime frequency with more modern buses has already attracted many more passengers to the existing service.

'I have had people come up to me on a regular basis at my street surgery and elsewhere, and the need for a bus service to Temple Meads keeps cropping up. Our survey demonstrates that this is the case. I'd like to explore opportunities to win funding to help get a service underway'

'I don't suppose anyone expects a new service to be up and running tomorrow. We see this as the start of a campaign both pre- and post-election. Support for better bus services to Temple Meads will certainly be part of my manifesto for the council elections. It is also going to be necessary to seek wider support from the area. But I do wonder if there isn't a wider need for a bus manifesto for the local area - various other things need to be addressed - such as helping those who find it hard to get to the existing routes. Or communicating the services which exist.'

Note 1:
The survey asked a number of questions about the bus service, ranging from local residents views of the price, frequency, and what routes they would like to see which don't exist at the moment. The results showed that something like 80% of people thought the price too expensive. Perhaps more surprisingly, around the same number thought the frequency of the existing service was satisfactory or good.

When it came to destinations wanted, a number of issues came up. These included requests for services to the hospital, different parts of the city centre and Clifton. However, the stand out result came from those wanting to get to Bristol Temple Meads (62 out of 162 ie 38%).

Note 2:
Charlie Bolton, who served as a Southville councillor from 2006 to 2010, will stand again in May when the present councillor, Tess Green, steps down after representing the ward for four years.

Meeting - Making the economy work for the common good 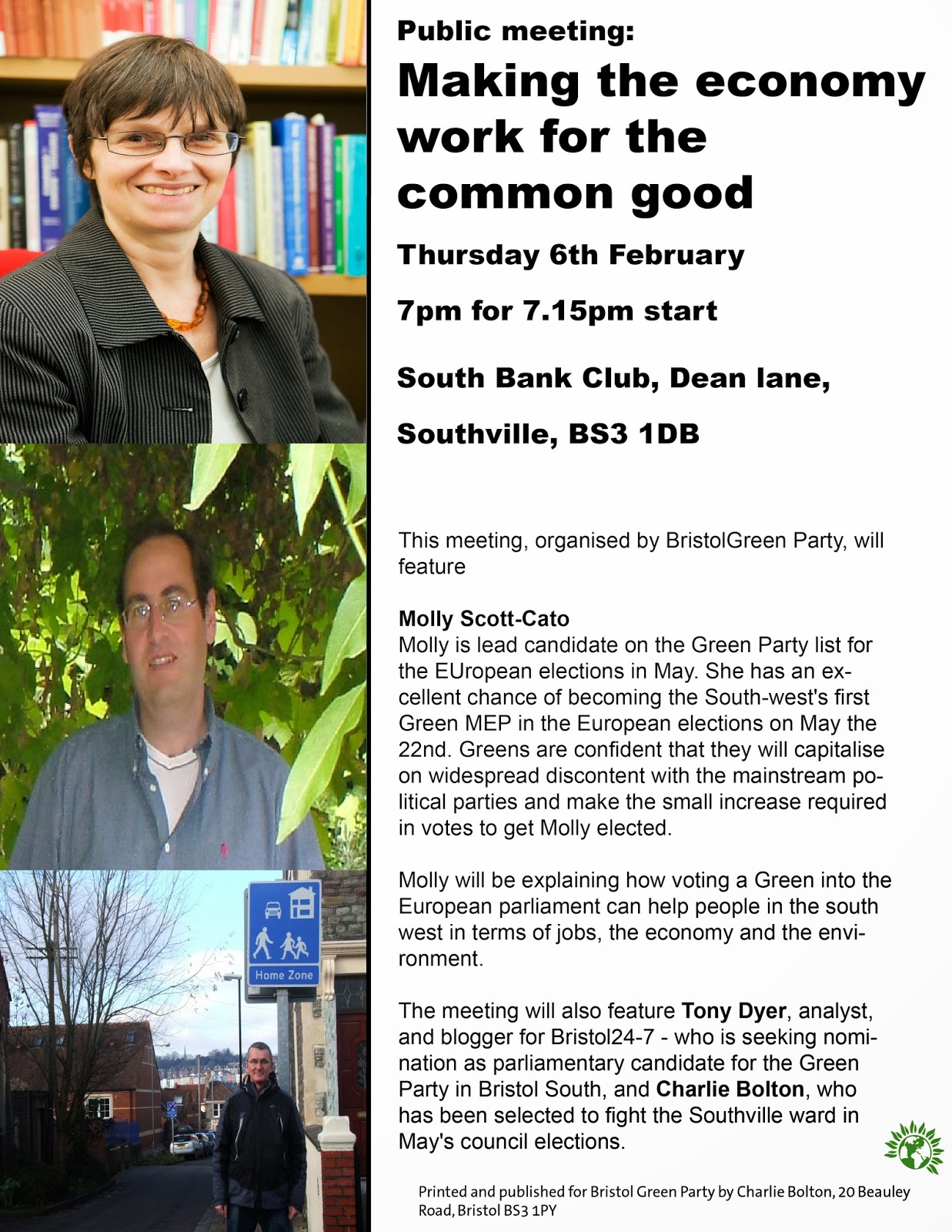 Informal consultation for Southville Residents’ Parking Scheme begins on the 3rd of February.

The council will distribute a survey to all households and businesses in the area before the consultation starts. Residents in Southville can also view plans for their scheme and complete the survey online at: www.bristol.gov.uk/RPS. Completing it will help the council to improve the plans to meet local needs before they are formally advertised for statutory consultation.

Two residents’ drop-in sessions have been planned as part of Southville residents’ parking scheme consultation. The sessions should help residents to understand the scheme and discuss any changes they may like to see before the design is finalised.

The council is particularly keen to hear from residents with existing driveways. The scheme design shows double yellow lines across each drive, but residents can ask for these to be removed.

Eric Booth (well known in Southville and cycling circles and all-round good person) raised the idea of 'pocket plazas' while Bristol was a cycling city. Here is the email he sent to me about it at the time

'With momentum behind making our streets more pleasant, accessible and welcoming to people it might be time to revisit a Cycling City idea that was 'parked'.

The 'Bristol Pocket Plaza' would be a modular, freestanding and moveable unit that could be used on every street in the city. It would take the space of 1 or 2 car spaces and could be delivered on the back of a small truck. It would include:
- a bench
- a planter
- a notice board
- bike stands with option for them to be covered and secure or basic stands

Each location would have a 'sponsor' prepared to keep an eye on it, look after the planter, update the notice board and report problems. Could be a shop or residents group.

Could be used for 'suck it and see' traffic calming and DIY street changes.

Never progressed but worth dusting off? Need a picture or design. Could be a competition?

I've always thought that something like this would be a great way of doing just a small thing to break up 'streets as a car park syndrome'. So how do we make it happen.....idea for Bristol as a Green Capital, anyone?
Posted by Unknown at 10:10 No comments: 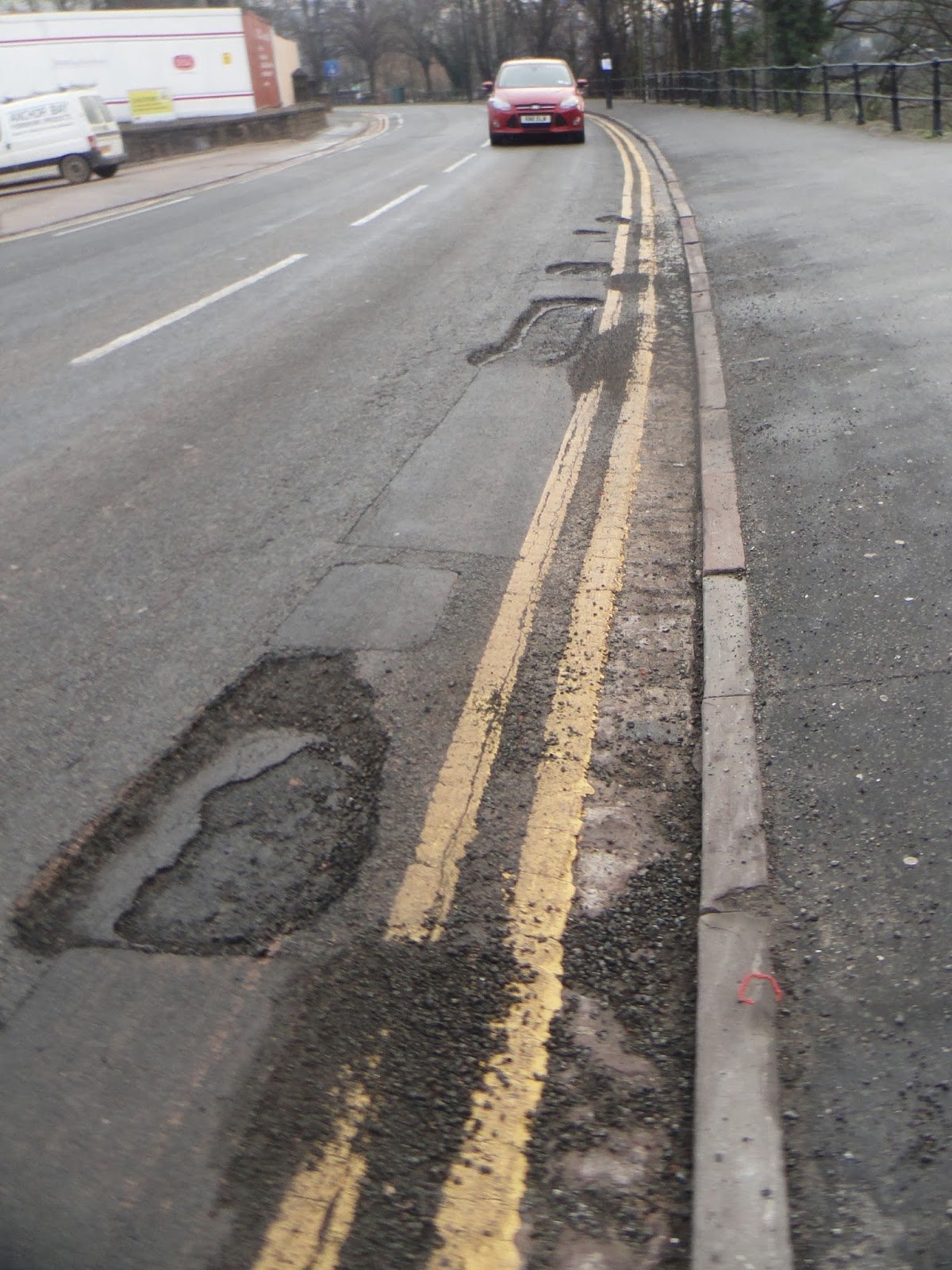 I know this is the classic piss-take out of actual or potential councillors, but there are a number of potholes on the cycle route from town to Southville

I've filled in a form at

I write while awaiting the hordes of Romanian and Bulgarian migrants we were promised by the Daily Express to come piling into Bedminster. (Funnily enough, I haven't seen any yet). However, while I wait, I am somewhat puzzled at the opposition to their arrival by large sections of the Tory party.

After all, I am old enough to remember Norman Tebbitt  exhorting us all to get on our bikes and seek out jobs. And, frankly, what is an economic migrant other than someone who does exactly that. (Ok, it isn't a bike, but you know what I mean).

Of course, the basic problem is the significant variations in standards of living between different parts of the world. The UK, for all its problems, is far wealthier than parts of Eastern Europe, and both are far wealthier than than parts of sub Saharan Africa (for example). As a Green, I have always thought that the answer was to bring up the standard of living of the poorest, while at the same time getting the richer countries to recognise the possibility that they may need to give up something. In fact, it is a vital part of any attempt to address the huge problems our environment faces. (When applied to Climate change, this is part of a well know theory known as 'Contraction and Convergence', for example).

So while I await the Romanian hordes, perhaps we could move the debate on from the usual petty-Englander 'chuck them out' nationalist claptrap, and start to seek serious solutions.

It is great to see the rollout of 20mph start to go ahead across the City. It is something we in the Green Party have been campaigning for since the 1990's, so to see it finally come to fruition is excellent news (although it has to be said, more elected Greens would mean more of 'this kind of thing'!).

Where I live in Southville, we have had 20mph for a couple of years now, and you really do notice the slower speeds that most motorists now adopt. In fact, I find I am still adjusting to the additional time I have to cross the road when I see a car coming. It has proven to be good news for people shopping on North St, good news for parents taking their children to school, good news for cyclists. Good news for the community as a whole, in fact.

I understand the frustration of motorists who just want to drive through an area as quickly as possible, but it is our home and it is great to see most motorists adhering to the limit. It does however come as no surprise to see the cynics who see anything that slows the motorist by even a small amount as some how to be resented. I'd just point out that we all live somewhere, and we all want the best for our families and local communities. As such, I urge motorists to obey the new slower speed limits. I ask them to respect them, and who knows, you might even start to like them.


Charlie Bolton
Green Party candidate for Southville
Posted by Unknown at 04:22 No comments:

This is the first of two (possibly more!) blog posts about the local bus services (the next post will give our response to it!). It reports the results of the survey we carried out at various locations in the area. Many thanks to the 216 people who responded. Here are the the results. 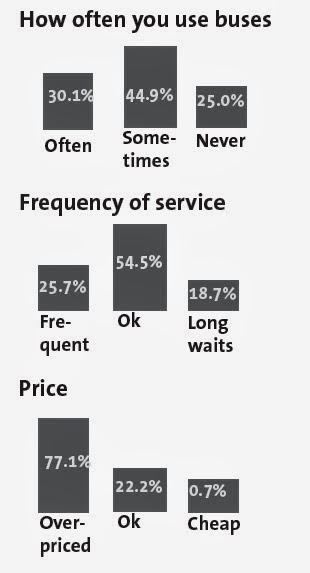 The normal problems people have with buses are to do with price and reliability.

So maybe the local bus company can take some reassurance that around 80% of responses suggested people were satisfied with the frequency of the service. Equally unsurprising is that a similar number regard the service as being too expensive. 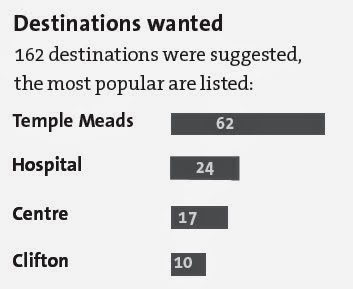 When asked if there were places you would like to get to, Bristol Temple Meads was a clear winner, but other destinations in the City Centre were also suggested. (In fact, we quite like the proposal from one person in Park Road who suggested a service  which went around the city centre, taking in places like the hospital and Cabot Circus.

A number of issues were raised. Recurring themes are

Other suggestions included the need to give better training to bus drivers to be more considerate to vulnerable road users, and buses need to be accessible for the disabled